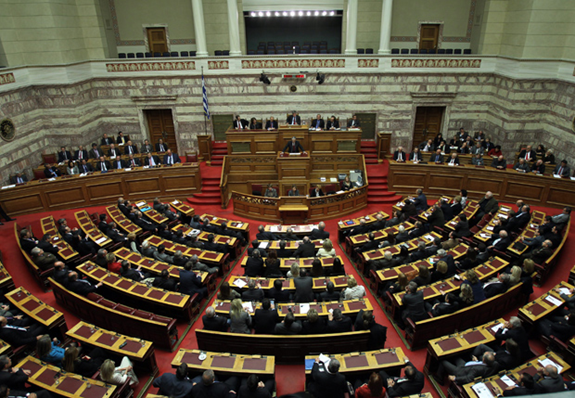 When a country like Greece experiences a financial, employment, and economic meltdown unlike no other in its recent history, then it’s time to look beyond the symptoms and consider the possible causes.  Is Greece’s current sovereign debt crisis something that can be fixed with EU loans and foreign investment… or do the people need to question the very system of governance that brought them to the brink of total economic disaster?

I would argue that ‘parliamentary democracy’ (what is commonly known as the Westminster model – as it evolved out of the UK parliamentary system of governance) as it exists in Greece and many other countries around the world is in need of some serious reform.  More specifically, what the current system of governance in Greece is lacking is… competition!  The Prime-Minister is in charge of the legislative majority, and the executive government; in the absence of a truly independent court system capable of challenging the constitutionality of government actions, and meaningful devolution of powers to the regional administrative authorities, there are no checks to the political power of this one individual.

Over the past 30 years, Greek Prime-Ministers have been able to rule Greece without a proper challenge to their authority.  This was done by design, because the country needed swift reforms (and therefore a strong leader) to achieve economic development and progress.  Since whatever progress Greece made in the past 30 years has been virtually wiped out with the sovereign debt crisis, maybe now is the time to consider a system of governance that puts more emphasis on balance, rather than expedience.  Greece needs a system of governance with true separation of powers between the executive and the legislative branch, where government and parliament are in competition with each-other to deliver the best services for the people.  Furthermore, Greece needs a strong and independent judiciary that can challenge government excesses, and an empowered citizenry through further devolution of powers to the local level.

Separate the Branches of Government

Furthermore, the only way to truly have a ‘divided’ government, which separates the executive from the legislative branches, and therefore introduce real competition in the system, would be by staggering elections; four-year terms for parliament and the President, fixed election dates, but not elected at the same year (for example, parliamentary elections in 2014 but government elections at 2016).  Elections for the executive (President) could be done in two rounds (if during the first round no candidate gets over 50%), and term limits could be used to guarantee rotation at the top of the government.

Finally, there needs to be direct accountability of the actions of parliament members.  That means no more secret ballots (the people deserve to know how their elected representatives voted – and thus have something to judge them by come next election), and furthermore electoral districts should be for a single member.  From Athens all the way to the most remote prefectures/departments (Nomoi), the country should be carved up into single-member electoral districts.

Under the current system, around 250 members of parliament are elected directly by the people (the rest being apportioned to the winner – to achieve ‘majority autonomy’).  This arrangement leads to complete perversion of democracy, where one party can have less than 40% of the national vote, yet earn more the 50% of the parliament seats.  Single member districts, based on the current number of directly elected members (around 245), will prevent one party from gaining majority and therefore force political parties to enter into coalition arrangements in order to pass legislation in parliament (just like it is in most major developed countries of the world).  Furthermore, single member districts might free politicians form the control of the party, thus making them more independent and hopefully more accountable to their districts.

Bring Back the Old Senate 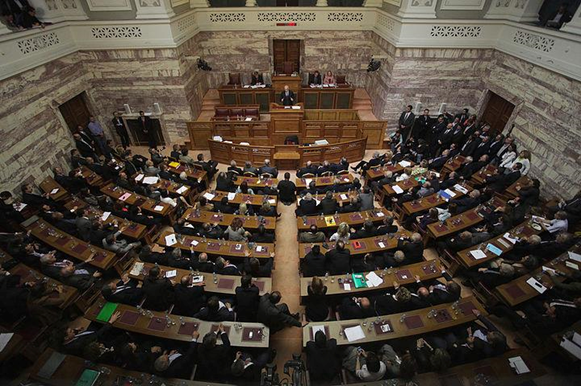 Finally, even though Greece is a small county, devolution of power (not regional autonomy like in federalism – but administrative freedom by the regions to run their affairs) will have to be part of any constitutional reform.  For the rest of the country, Athens has become this center of power which does not know the real needs of the rest of the people, nor does it care to serve the interests of the people in the ‘periphery’ (eparxia).  Furthermore, the people will have to take more of an active role in their government, if they are to guarantee that the new system does not also because hollow and complacent.  That means more administrative duties and powers will have to be transferred to the local prefectures (Nomoi).

During the past 5 years, the Greek government instituted two major reforms of the national administrative system.  In 1997, the ‘Kapodistrial plan’ merged the many tiny villages and communities to existing municipalities (Dimoi), thus reducing the number of the lowest form of administration from 1033 to 325.  This was a reasonable reorganization, considering that most of these small villages and communities had to rely on near-by cities for almost all their administrative needs.

Then, 2 years ago, the ‘Kallikratis plan’ came into effect, which although technically granted municipalities (Dimoi) and regions more administrative powers, it also created 7 decentralized administrations (apokentroménes dioikíseis), comprising two or three regions each, and run by a government-appointed general secretary, assisted by an advisory council drawn from the regional governors and the representatives of the municipalities.

The ‘Kallikratis plan’ though well intended is inadequate in properly empowering the people at the local level.  Rather, I would suggest bringing back the Senate (Gerousia), composed of 55 members, one from each Prefectures (there are 51 Nomoi), plus three more for Attica and one more for Thessaloniki (due to their concentrated population).  This distribution might not sound very ‘democratic’, but it makes perfect sence if the function of the Senate would be to facilitate the role of the central government ‘outside of Athens’ where all the ministries are located.

Senators could be elected along with the Prefect (Nomarxis), and they could literally be the ‘Deputy-Prefect’ (Anti-Nomarxis), thus ‘representing’ the local government in the national government and vice-versa.  Unlike other Senates of the past and around the world, this will not be an actual legislative body.  Rather, this Senate’s primary responsibility will be to approve the selection of cabinet members from the President/Prime-Minister (head of the new executive), as well as other high-level government officials whose actions impact everyday life throughout the country (head of the Policy, the Army, the Tax Authority, State-owned companies and National Bank, etc).

Although parliaments pass laws, most often they tend to be broad documents that get ‘explained’ later by government departments with no review or approval by the parliament.  This ‘delegation of legislative power’ needs to be checked and balanced in order for the system of governance to work better.

Delegation of legislative powers is generally allowed under the Greek Constitution, and in all parliamentary systems of governance.  The most significant form of delegation is from the Parliament to the President, who issues Presidential Decrees (Proedriko Diatagma).  The Parliament may also delegate power to the executive branch.  Thus, Ministers of the Government issue Ministerial Decisions (Ypourgikes Apofaseis).  Although each Presidential decree must be checked by the Council of State (Symboulio tis Epikrateias) that does not hold true for Ministerial Decisions.

A Senate composed of technocrats from each Prefecture, assisted by competent staff, could exercise a more democratic oversight of the government acts then the unelected Council of State.  This way the Senate will be responsible both for the selection of government members (cabinet members and high ranking officials) as well as their regulatory actions.  Like a board of directors, the Senate can focus exclusively on exercising oversight of the government, while the Parliament focuses on passing new laws.  Both the Senate and the Parliament will (and should) monitor the spending of money (the People’s money) by the executive.

Another reason why Prime-Ministers can get away with anything they wants under the current system of governance is because the judicial branch is fragmented in five ways.  Instead of one ‘Supreme Court’ that truly stands on top of the legal enforcement pyramid, thus having the power and political weight to discipline governments, courts in Greece are divided into Administrative, Civil and Criminal.

Although all courts can examine the constitutionality of laws through judicial review, their decisions are only binding for the particular case before them.  This ‘civil law’ distinction, coupled with the fragmentation of the court system leads to very week judicial review of government actions.  Greece desperately needs ONE Supreme Court with jurisdiction over ALL matters of legal interpretation, and with the power to find acts of both the legislative and executive branch unconstitutional.

Competition at Any Cost…

There are many ways to introduce more competition within the Greek system of governance.  What I have outlined above are only some ways this can be achieved.  However, nothing will happen as long as constitutional changes have to go through the current system of double approval by two consecutive Parliaments.

The call should be for a Constitutional Convention, with diverse representation, which over the course of a couple of months (it should not take more than that) can draft a new constitution to be place on a referendum by the people.  Until then, all the Greek people can hope for is reduction on the salaries of politicians.