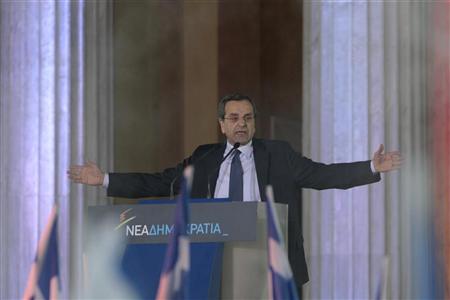 On May 6th, Greece will have the most important election of its post junta era.  The sovereign debt crisis has humbled the country and the EU imposed austerity measures have angered the people.  Unlike the Koskota scandal that led to the 1989 coalition government between Nea Dimocratia (ND) and the Communist Party, the stakes are much higher now.  What is at state is the place of the country within the European Union.

If ND get 30% on the Sunday polls, then along with PASOK they will be able to form a somewhat stable government, and Mr. Samaras (leader of ND) will have a large enough margin in the Parliament (180 out of 300 seats) to push through both the austerity measures and the much needed economic reforms.  However, the most likely outcome is that ND will get less than 30%, which will make any coalition government weak (perhaps even a minority government), unable to implement any real reforms and end up with new elections in a couple of months.

As I argued before, the real cause of the Greek sovereign debt crisis was not simply bad government policies and inefficient collection of taxes.  Rather, it was a collective failure of the current system of governance, which concentrates too much power on the hands of one person (the Prime-Minister) in hopes of achieving swift and holistic resolution of the many problems the country is facing.  Unfortunately, the ‘dictatorship of the Prime-Minister’ and the lack of any serious checks and balances leads to abuse of power and inefficient decision making based purely on political reasons and reelection ambitions.

Mr. Samaras continues to cling on this antiquated model of governance by constantly demanding complete unilateral majority from the electorate.  Instead of recognizing the need for a coalition government that will be inclusive and will both represent more people as well as govern by consensus, he insists that what the country needs now is “a strong government that can push through the much needed reforms.”  Was this not how previous PASOK and ND administrations governed the country during the past 30 years?

Instead, Mr. Samaras should recognize that the times are changing, and that at least in the near future (next couple of election cycles) smaller parties will do well enough to gain both entry into the parliament as well as prevent one party from forming a government without coalition partners.  Amending the constitution to change the current system of governance might be the only thing his post-election coalition will be able to agree, and it could prove both popular with smaller parties and beneficial to his political career.

What smaller parties want more than anything is a place in parliament and a voice in policy setting.  They want an election system that awards parliamentary seats proportionally, with no bonuses for the most popular party.  Furthermore, in order to be able to ‘shine in the eyes of the electorate’, smaller parties would rather see government ministers (who dominate parliamentary proceedings) out of the parliament and out of the legislative process.

On the other hand, Mr. Samaras wants to be the ‘undisputed’ leader of the government.  As long as he is competing with smaller parties for a parliamentary majority he will be denied the privilege of governing on his own.  If he could reinstate the President as head of the government (as it was under the 1975 Constitution, when the President selects the Prime-Minister and could dissolve the government, and played a greater role in foreign and defense policy) and make the position electable by the people, then Greece could have a presidential system like France.  Mr. Samaras will have no problem winning the presidency in the second round of voting!

The ultimate objective (for the good of the country) is a system of governance that promotes ‘competition’ within the government.  Just like the Greek economy needs to open up and be subject to greater competition, so does the government – with an executive separate from the legislature.  Stronger separation of the executive and the legislative branches will allow them to better focus on their respective duties, which ‘supervising’ each other’s work.

There are four basic constitutional reforms that Mr. Samaras should promote:

1) Make the President the head of the government, with the Prime-Minister as the Vice-President, make the President electable directly by the people, and fix the election of the President in time (same month every four years), and impose term limits (two terms total).

2)  Remove the cabinet from the Parliament (cabinet members cannot be parliament members as well), and the cabinet cannot propose legislation (except for the government budget).  This will strengthen the Parliament, and make it more directly accountable to the people for its legislative products.

3)  Make Parliament electable by a pure proportional representation system, with no bonus for the first party or special ‘nationwide’ seats, and fix Parliamentary elections in time (same month every four years).

4)  Stagger elections every two years (Presidential election in 2012, and Parliamentary election in 2014, and so on), thus creating the possibility of different party’s holding the Presidency and the majority in the Parliament.  This will guarantee the best chance for ‘divided’ government and more ‘competition’ between the branches.

The Process after the Election

Unfortunately, constitutional reforms in Greece are laborious in process and very time consuming.  Amending the constitution requires a majority vote in two consecutive parliaments, one of which will have to approve any constitutional amendments by a three-fifths majority (180/300).  Therefore, if after the Sunday election ND has not gained enough parliamentary seats to form a strong and stable government, it will have to form a coalition government.  Mr. Samaras needs to resist the temptation of holding new elections right away and focus instead on reforming the system of governance.

If ND cannot push forward with the EU/IMF economic reforms and conditions due to lack of parliamentary majority, then maybe the best thing the next parliament could do would be to reform the constitution.  In three months’ time Mr. Samaras can call for new elections, and a new parliament to ratify the amendments to the constitution – opening the way for Presidential elections in the fall under the new system (elected president, government out of the parliament, etc.).

In these politically uncertain times, reforming the system of governance and improving the political process is imperative if Greece is to avoid the mistakes of the past.  Economic reforms and austerity measure are no doubt important, but so is the legislative process and accountable governing.  If the Greeks cannot change their system of governance now that the people are engaged and everything is at stake, they will never do.

The path might be hard and cumbersome, but the results of a better government will be enjoyed forever.